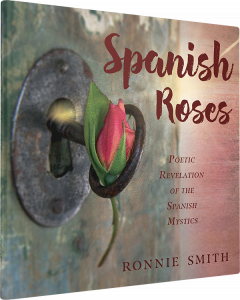 “SPANISH ROSES” was just released in mid-November 2022. This is a first edition of Poetic Revelation of the Spanish Mystics. This is the third book of mystical poetry on the nature and lives of holy men and women who toiled in the fields of God before us. Hispanic contribution to the mystical path of Christianity is pronounced in the Spanish Golden Age of literature and the arts, the 16th and 17th centuries, where the preponderance of the saintly personages in this book lived out their lives of service. In deference to the rest of Europe, Catholic mysticism flourished throughout society during this timeframe because the Spanish held to the belief of Divine Intervention in everyday life. Therefore, mysticism impacted healing, politics, religion, literature, the arts, and social structures. One could say that the Spanish Golden Age of the arts and literature uniquely coincided with the Spanish Golden Age of Mysticism.

The design of poems and the mystical illustrations painted in this book intend to celebrate Spanish/Hispanic spirituality given to the world. Spanish spirituality was recognized as deeply devotional and mystically gifted throughout the Spanish Golden Age. A number of these original poems are Spanish poetical forms. Ronnie chose one of these forms, the Espinela, to resonate throughout the book on every 8th poem. Books can be ordered for Hardcover (art coffee table), paperback, and eBook online at Amazon or any online bookstore!

We are using cookies to give you the best experience on our website. You can find out more about which cookies we are using or switch them off in settings.

This website uses cookies so that we can provide you with the best user experience possible. Cookie information is stored in your browser and performs functions such as recognizing you when you return to our website and helping our team to understand which sections of the website you find most interesting and useful.

You can adjust all of your cookie settings by navigating the tabs on the left hand side.

Strictly Necessary Cookie should be enabled at all times so that we can save your preferences for cookie settings.

If you disable this cookie, we will not be able to save your preferences. This means that every time you visit this website you will need to enable or disable cookies again.