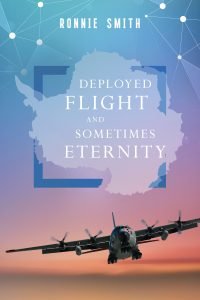 Deployed Flight and Sometimes Eternity is released in paperback and e-book in January 2021. A totally revised second edition with new poems and numerous photographs of military aircraft, Deployed Flight and Sometimes Eternity poetically recounts the adventurous career of a military aviator who flew across the hemispheres spanning 30-years of service; life, love, combat, patriotism, and intense comradeship weaves this anthem about what it meant to serve. From the famine-ridden deserts of Somalia to the war torn tenements of Bosnia and Herzegovina, to the ice caps of the polar regions and more, the planet-scape inspired Colonel Ronnie Smith to write from the heart. And herein he shares the poignant, the humor, the elegance, the tragic, and the sacredness of the human experience in uniform.

We are using cookies to give you the best experience on our website. You can find out more about which cookies we are using or switch them off in settings.

This website uses cookies so that we can provide you with the best user experience possible. Cookie information is stored in your browser and performs functions such as recognizing you when you return to our website and helping our team to understand which sections of the website you find most interesting and useful.

You can adjust all of your cookie settings by navigating the tabs on the left hand side.

Strictly Necessary Cookie should be enabled at all times so that we can save your preferences for cookie settings.

If you disable this cookie, we will not be able to save your preferences. This means that every time you visit this website you will need to enable or disable cookies again.